Last month my featured artist was “The Black Potter”, my cousin Jimmy McDowell. My blog post featured his ugly “Face Jugs”. He also makes “butter bells”. Here is a little history about butter bells used in the south from my cousin Michel McDowell (Jimmy’s brother).

“When I was 9, I spent the summer with my Grandma Wills in rural North Carolina. The best thing I remember (aside from running around like a barefoot heathen) was the fresh butter she always had on the table which, of course, went great with her homemade biscuits. The butter was stored in what is called a “butter bell”…a two piece implement where the butter was stored in the lid and turned upside down and placed in the bottom container which had water in it. No refrigeration required. This creates an airtight seal to keep the butter soft and fresh. Butter bells have been around for centuries. I got another one this weekend. I know they make spreadable butter but they add canola oil to keep the butter soft…shelf life is short and it taste funny to me. With a butter bell, you can even do compound butter…like my favorite…Honey, Orange Butter.”

Here is the recipe for Orange Honey Butter and Biscuits

Preheat oven 400.
Mix together dry ingredients, add butter, add milk
Mix and Knead into a ball
Roll out to 1/2″ thick
Cut each biscuit into 2″ circles
Place in greased baking pan
Cook for 12-15 minutes or until lightly brown on top
Serve with butter
Serves 4-6

Like Loading...
Another featured artist. Pottery is one of my passions! I studied pottery in college for 4 years, and every now and then I enroll in pottery studio at our local fine arts center.

Jim McDowell is my cousin. He’s a professional potter. He creates Face Jugs, and functional pottery. His work is beautiful, and it has a history. Jim lives in Weaverville, NC now. Please visit www.blackpotter.com for more history.

He calls himself the Black Potter…

“The pot is the man: his virtues and his vices are shown therein—no  disguise is possible.”

Jim McDowell, who calls himself “the Black Potter,” believes himself to be the only black potter who creates face jugs based on both his family traditions and his sacred ancestral tradition of using face jugs as grave markers.  He’s been a studio potter for over 30 years and has been creating face jugs for nearly 25.

Born in Norfolk, Virginia, Jim is a great-great-great-great nephew of a woman named Evangeline, a village slave potter in Jamaica; a great-grandson of a tombstone maker from Gaffney, South Carolina; and a son of a self-taught artist, James T. McDowell, Sr., Jim came of age in Washington, D.C, during the struggles for Civil Rights. A severe hearing loss gave him trouble in school so he left to join the Job Corps and later began working in the coal mines of Kentucky.  A Viet Nam Era-vet stationed in Ansbach, Germany. Jim began to pray during difficult times and deepened his spiritual relationship with God. He changed his thoughts about killing and when he told this to his commanding officers, they assigned him to operate the craft shop on base.

Jim wanted to use the pottery wheel and kiln he found there and teach others to do the same, but he had to learn it himself first.  He heard about German potters in Nuremberg and went there on leave to find them.  He didn’t speak German and they didn’t speak English but he indicated he wanted to learn how to make potter. One potter bluntly handed him a broom. JIm swallowed his pride and swept the floor. Over time, they let him observe their work, clean up the shop, and load the wood fired kiln, which he especially loved.  He visited a few times and took what he learned back to Ansbach, practicing on the wheel until he was good enough to give lessons. 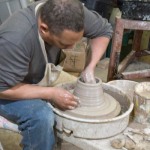