Easter Sunday at our church was packed. But Easter Sunday Goers in a building aren’t a measure of anything. The Sunday after Easter it was half full. I wonder if  Easter meant anything? 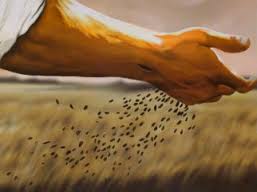 [4] While a large crowd was gathering and people were coming to Jesus from town after town, he told this parable: [5] “A farmer went out to sow his seed. As he was scattering the seed, some fell along the path; it was trampled on, and the birds of the air ate it up. [6] Some fell on rock, and when it came up, the plants withered because they had no moisture. [7] Other seed fell among thorns, which grew up with it and choked the plants. [8] Still other seed fell on good soil. It came up and yielded a crop, a hundred times more than was sown.” When he said this, he called out, “He who has ears to hear, let him hear.” [9] His disciples asked him what this parable meant. [10] He said, “The knowledge of the secrets of the kingdom of God has been given to you, but to others I speak in parables, so that, “ ‘though seeing, they may not see; though hearing, they may not understand.’  [11] “This is the meaning of the parable: The seed is the word of God. [12] Those along the path are the ones who hear, and then the devil comes and takes away the word from their hearts, so that they may not believe and be saved. [13] Those on the rock are the ones who receive the word with joy when they hear it, but they have no root. They believe for a while, but in the time of testing they fall away. [14] The seed that fell among thorns stands for those who hear, but as they go on their way they are choked by life’s worries, riches and pleasures, and they do not mature. [15] But the seed on good soil stands for those with a noble and good heart, who hear the word, retain it, and by persevering produce a crop.

The gospel is received in different ways, and is determined by a person’s heart. Someone who is truly saved will go on to prove it.

Matthew 13 24:29
But let the wheat and weeds grow together, because come harvest time, only the righteous will be harvested.

I’m glad Easter Service was full, we did our job, we spread the Good News!