Well, it’s that thawing time of year here in Southern California. It’s the time of year that the rain subsides, the mornings are warmer, the days stay warmer. I guess we’re headed toward spring. You begin to see more bunnies munching on grass, and where there are bunnies, there are coyotes. In the last 2 weeks their beady little eyes have been watching Sadie and I on our morning and evening walks. I see them walking in the drain paths around 7:00am, directly across the street from our house (about 100 ft)! 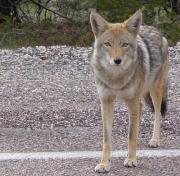 Within urban and suburban areas in California, some coyotes have adapted to residential neighborhoods, parks, and open spaces, and have lost their fear of humans. This may be a result of behavioral changes that have occurred over several generations of coyotes. Coyotes thrive in such areas because food, water, and shelter are abundant, and coyotes living in these environments may come to associate humans with food and protection. Once attracted to suburban areas, they prey on the abundant rodents, rabbits, birds, house cats, and small dogs that live in residential habitats. They also will feed on household garbage, pet food, and seeds and fruits of many garden and landscape plants. In some localities, this has resulted in the development of local coyote populations that seemingly ignore people, while a few coyotes have become increasingly aggressive toward humans. They will stalk and even attack children or adults, or attack pets being walked on a leash by their owners. More than 160 such attacks have occurred in California since the 1970s, and they are becoming more frequent, particularly in suburban areas of Southern California. For this reason, I am very cautious when walking my dog in the early morning and late evening, particularly at this time of year. (UCDavis.edu)

When I moved to California back in 1991, I had this picture in my head of beach, desert, metropolitan city. I never really considered the wildlife living amongst us, until one early morning visit.

I had just started my new job with Kodak. I was heading out the front door to hop in the car on my way to a corporate meeting in LA. I turned around to lock the front door, and headed toward the car in the driveway. I dumped all my gear in the back seat, and realized I forgot something. As I turned around to scurry back to the front porch, there right in front of the door, standing 10 yards from me, stood a raccoon. It wasn’t your ordinary, fun little furry raccoon, it was a MONSTER raccoon! It was the size of a small Lab! It just stood there staring at me. I swear it knew that I was heading for LA, and that I needed to get on the freeway immediately to avoid the morning traffic! It finally turned in its own sweet time, and headed back into the bushes.

I love California, and wouldn’t trade living here for anything…….so move over wildlife!